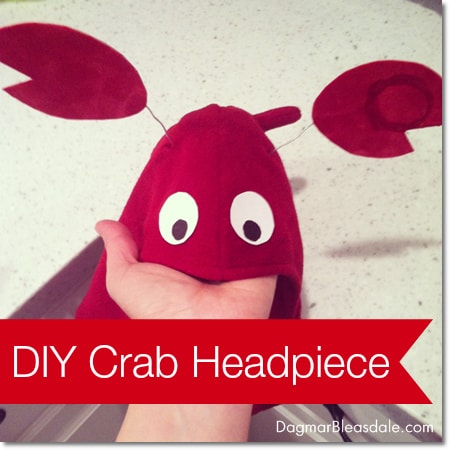 L had been practicing for a musical in school for months. He was a crab in this story of animals in the sea, and I had to come up with a costume.

Instead of buying a crab costume, I decided to make one myself. You could obviously make this DIY crab headpiece for Halloween as well.

I kept it simple and thrifty: I found red jeans and a red, long-sleeved T-shirt at Once Upon a Child.

Then I had to come up with a crab headpiece. I ended up having everything in the house that I needed to make this the day before the show: 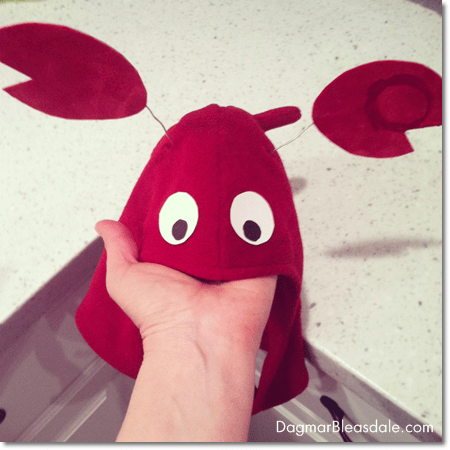 These are the supplies I needed to make this crab headpiece: 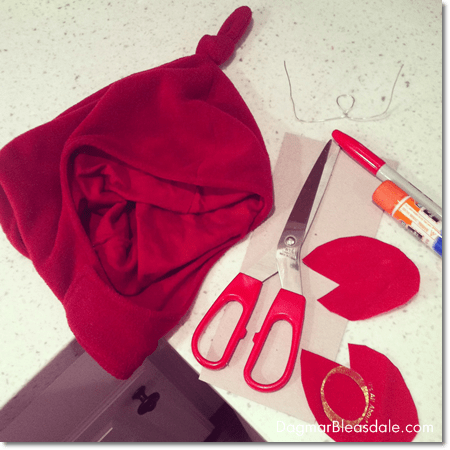 I looked through L’s winter hats and found this red hat – perfect!

Then I found a little red bag from an Overstock.com purchase, and I recycled one of those wires that tie down certain toys in their packaging. I always keep them because they come in handy for all kinds of projects. 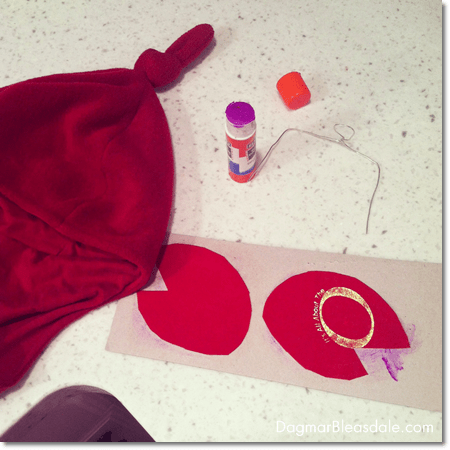 I started with bending the wire into shape. I made a loop in the middle because that made sure the crab claws would stay up on L’s head. Ideally, make the loop larger than I did.

I made two little holes in the hat and put the wire ends through them so that the loop was on the inside of the cap.

Then I cut the fabric of the red jewelry bag into crab claw shapes, glued those two pieces onto the cardboard, and cut them out again.

I colored in the “O” with a red Sharpie and taped the claws to the end of the wires. I could have also reinforced the claws by backing them with another piece of cardboard or red piece of construction paper, but I just colored the back red with the Sharpie.

L had wanted eyes on the headpiece, even though that meant he’d have four eyes. Sure, four eyes it is. So I cut out two circles out of thick paper I had, painted pupils on them, and glued them down on the hat.

That’s all! It took me about 10 minutes to make this crab headpiece, but I happened to be lucky to have all the supplies.

This is what my little crab looked like when he headed off to school the day of the musical. He was really happy with the headpiece.

It was an adorable musical production, and I was really impressed with what second graders can do already.

One thing I would’ve liked to add to his costume: two red oven mitts for his hands. I bet I could have found them at the dollar store if I would have had more time.

Have you ever made a costume for your kids? What did you make?