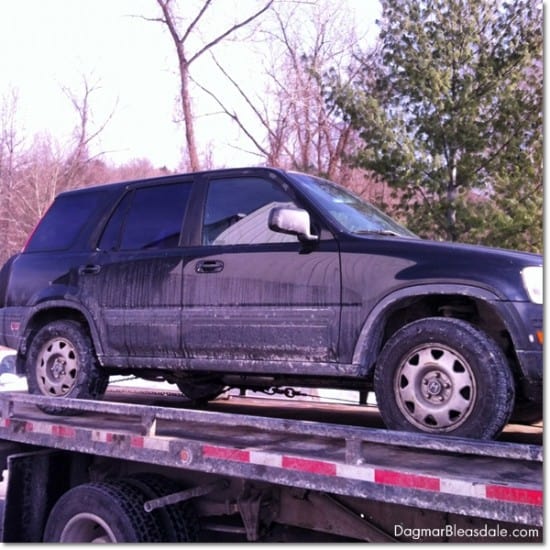 Landon and I had loaded up the car and were on our way to the Katonah thrift store and community center to drop off donations, and just before I got to the thrift store, the car started to stutter.

I knew it was bad and barely made it to the gas station/garage on the corner.

To make a long story short, I got the car towed to our local Honda garage and they checked it out.

I had just had the car there several times, to get it fixed after I got rear-ended January 2 and to get the timing belt and sway bar links replaced. Last year I put $2,500+ into it as well.

This time it’s the transmission. And I know it needs two new tires and I think an oil pump.

I could tell my mechanic felt bad, he knows how much money I recently poured into the car, and it would drive many more years if I fix it.

I took such good care of this car, and it doesn’t even have 200,000 miles yet. I was looking forward to that milestone.

But I knew what I had to do. I would love to keep it, but I decided that this sweet old car is going to retire.

Although it has a brand-new exhaust, rear bumper, timing belt, sway bar links, tire cover, and a hearty engine that could go another 50,000+ miles, it doesn’t make sense to keep pouring more money into this car.

But it’s hard. I love this car.

I bought it with my saved-up money two years after I moved to America. With cash — the Germany way.

I had had it with shitty $2,000 cars that broke down all the time — I wanted something new that wouldn’t give me any trouble for a while.

So I did a lot of research and bought the first Honda CRV they ever built in 1997 and left my beloved red Chevy Blazer behind. Here’s a picture of it with my friend Danja. I forgot about those cow seat covers! 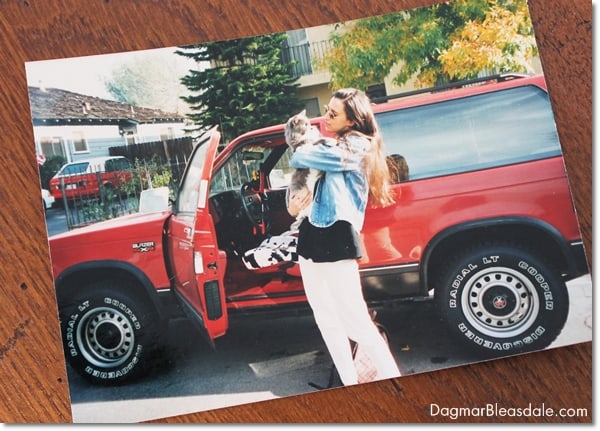 I liked how the CRV drove, how roomy it was, and it even came with a built-in picnic table. Plus, Honda’s drive forever, they said.

I moved eight times with this car. I took lovely road trips up and down the California coast with it many times.

When we moved from Los Angeles to New York, we had it transported here while Don drove his truck cross country. L was only six months old, so he and I flew here, but I would’ve love to drive cross country in my CRV.

I was proud to drive an 18-year-old car. I don’t need fancy — I need a car I can easily throw in a piece of furniture.

I’ve driven new cars and they all don’t have enough room on the inside because of all the annoying extra features I will never use.

I love this car, although it gets wet on the inside every time it rains and has ice on the inside of the windows in the winter because of the dampness.

I love it even though the back doors won’t lock anymore, and only one of the four over-head light work, on a good day.

I love it even though when it gets really cold, I sometimes have to hold the door closed while driving in the morning because it has to get warm enough for the lock to unfreeze.

This sweet old car has been with me half my life. I never gave it a name, but damn it, I’m going to miss it!

I had been waiting for the mountain of snow to melt in front of our house and was planning to get it washed to take a few good pictures of it, because I’m sentimental like that and knew it wasn’t going to be with us that much longer.

But another year would’ve been nice. Even another six months.

I only found one picture that was taken 18 years ago, after I bought it. I was a blonde then, with bangs. 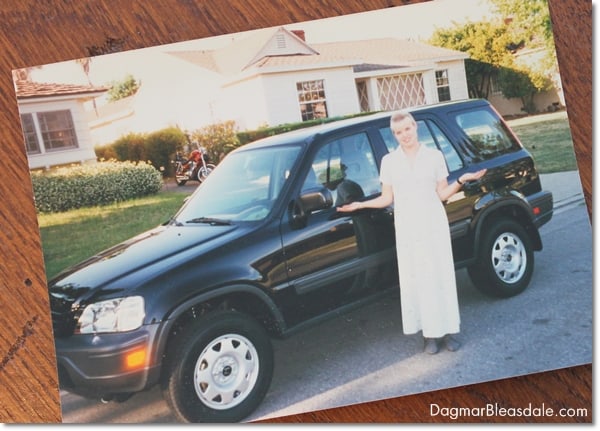 Last night during dinner I realized that yesterday was the LAST time I will ever drive my sweet old car. It’s sitting in the lot at Honda right now, and I have to decide who to donate or sell it to.

It’s not going to be my choice to give it up when I’m ready — the choice was made for me. That really got me, and I shed a few tears. Darn!

Goodbye, sweet old car. I’m going to really miss you and promise to hate the new car I have to get to honor you for a little while.

And I’m going to hate having a car payment, for the first time in my life.

Thanks for all the years and memories, sweet car.