Landon watching TV with his cousin James — after having chocolate ice cream at Grandma’s. 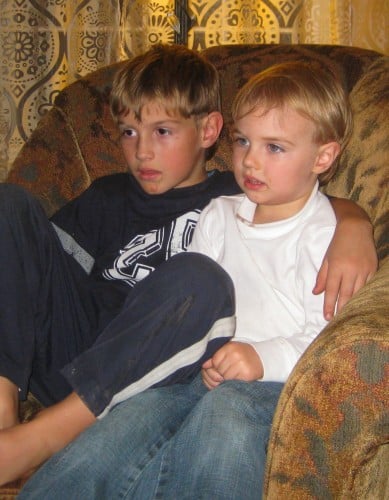 I did NOT let Landon watch the Barney moving for the 10th time so I could get some blogging done, no, not me.

I did NOT just change the number of times Landon has watched that darn Barney movie — it’s probably more like 15 times (not all of them just because I needed to get some blogging done, just to point that out :)

I did NOT not realize that Landon’s tonsils are very swollen. I was wondering why he was having such a hard time breathing during the night, but he didn’t act sick at all or complained about being in pain.

Four days into sleeping next to Mr. Snory, I got a good look at the back of his mouth and GOOD LORD! were his tonsils swollen!

I rushed him to the doctor and she said its some virus that will just run its course.

She said other kids would feel a lot worse and probably have a fever, but L is getting great antibodies to fight this because I still breastfeed him.

Moms, switch your pediatricians if he or she doesn’t support your breastfeeding choice!