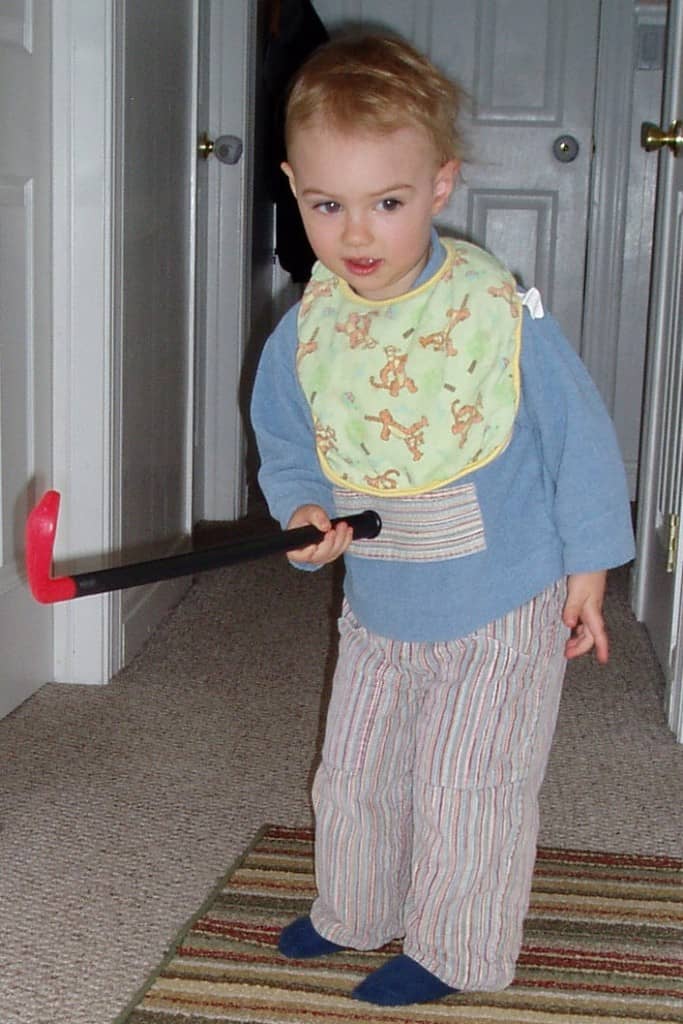 Today was a great day, and even better — a frugal day.

We got up after 9 a.m. (somehow Landon seems to know that it’s the weekend, during the week he gets up around 7:30 a.m. I needed that sleep, I had been up until 2 a.m. again blogging!) and ate a healthy breakfast.

I made oatmeal because Landon asked for it (ot meow).

I spend a little time on my computer marketing my blog (Twitter and Facebook updates, an e-mail to my friends) and got ready to head out.

I wanted to check out the rummage sale at a local church on my way to my dentist appointment.

It was the last day of the sale and you got to fill a bag for only $4.

I found some nice clothes and a few books for Landon and a Ralph Lauren sweater for myself. Can’t beat that for $4!

This is the third sale I have been to in the last three weeks, and Landon is totally outfitted for the next year or two.

There might be a few items I need to shop for later because I can’t predict how fast he grows, but I think I have everything he needs.

It makes so much sense to go to those sales — one was of a group of moms who have multiples and therefore plenty of things to sell, and the other two were at a church.

If I had bought all those things new at the GAP, Macy’s, or the Children’s Place, I would have spent hundreds more. If you want to save a good chunk of money, find out when local churches and schools in your area have sales.

You’ll get such bargains. I don’t have to buy books for Landon in a store for years, he has two boxes full of them waiting in the garage.

After that I rushed over to the dentist, and he agreed that we can wait on the two fillings that are iffy.

So I left all happy, and didn’t have to pay anything. Yay!

I called and checked in on Don and Landon, and they were playing outside with the neighbors’ kids, so I went through my coupons I have in the car and stopped to get some groceries.

I paid $89.82 for everything, and saved $17.66 by shopping for store brands and using coupons. And most of what I bought is organic.

When I came home, it was time to get Landon down for his nap, and Don fell asleep right next to him. He still feels sick, and also beaten up by his recent job, which has him work with concrete.

After Landon woke up, we let Daddy sleep some more and went outside again to play with the “trecka” (tractor, Trecker in German).

It was supposed to rain, but instead it was beautiful and sunny all day, so it was a perfect day to be out and catch some sunlight for free.

Don got up and had some leftover pizza while watching golf. Landon got out his little golf set and started to swing his club; I guess he was inspired!

Then Don took Landon over to Grandma so I could work. I would have liked to go as well, but I also like my time alone here. I opened all the windows to air out the house and cleaned up a little bit.

After taking a shower, I sat down with an ice cream sandwich and a coffee and watched the end of a Nora Roberts movie (okay, so I had two sandwiches!).

DVR is such a great thing, you fast-forward through the commercials and boring parts, and you get to see a movie in about 20 minutes!

I was thoroughly in heaven but also felt a little guilty for just watching TV. So I got busy reading my e-mails and started working on my next copyediting project (as coincidence has it, it’s about money matters!).

When the men came back, Landon went to sleep pretty fast (while nursing, which of course is free!), and here I am doing what I love — blogging!

I’d say, for a frugal gal like me, this was a pretty good day! I saved a lot of money, spent some money, and made some money working. Hope your day was great as well.

Finding Time for Exercising and… Taxes
Nursing on a Plane…