In the last two days we got ready for Christmas and Santa’s appearance. We started with the little Christmas party they had at Landon’s preschool. 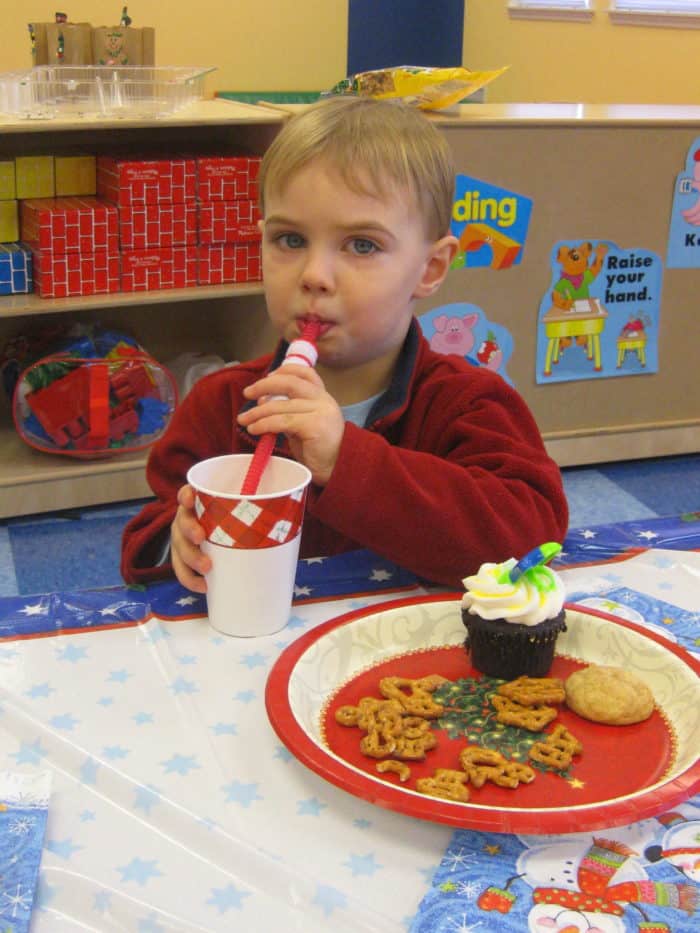 Yummy, cupcakes for breakfast! After nothing but sugary treats, those 10 kids went bananas!

Landon got to dance and play a little bit and then we left, because he usually doesn’t go to school on Wednesdays. 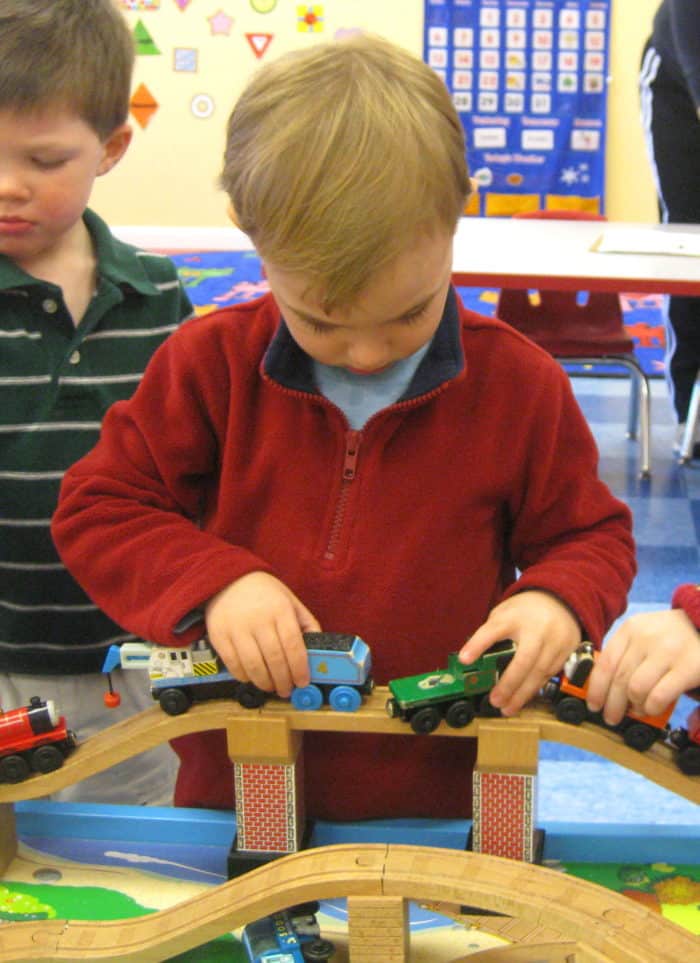 Today, Don’s lips uttered the head-scratching words, “Let’s go to the mall.” The MALL? On the day before CHRISTMAS? I was done with shopping, but apparently hubby wasn’t. Actually, I shouldn’t be surprised — Don usually shops last-minute. Since I can’t get Don to go to the mall all year long — he can’t stand the crowd — I was a TAD surprised when he wanted to go. But since I love to go out with him and Landon, off we went.

Landon got to play in the Build-A-Bear workshop while Daddy bought him the same Thomas-the-train lunch box with puzzle for $16 I literally had just bought Landon at a tag sale last week for 50 cents.

I had proudly shown Don what I had scored after the sale; how could he not remember that? Men — oye. 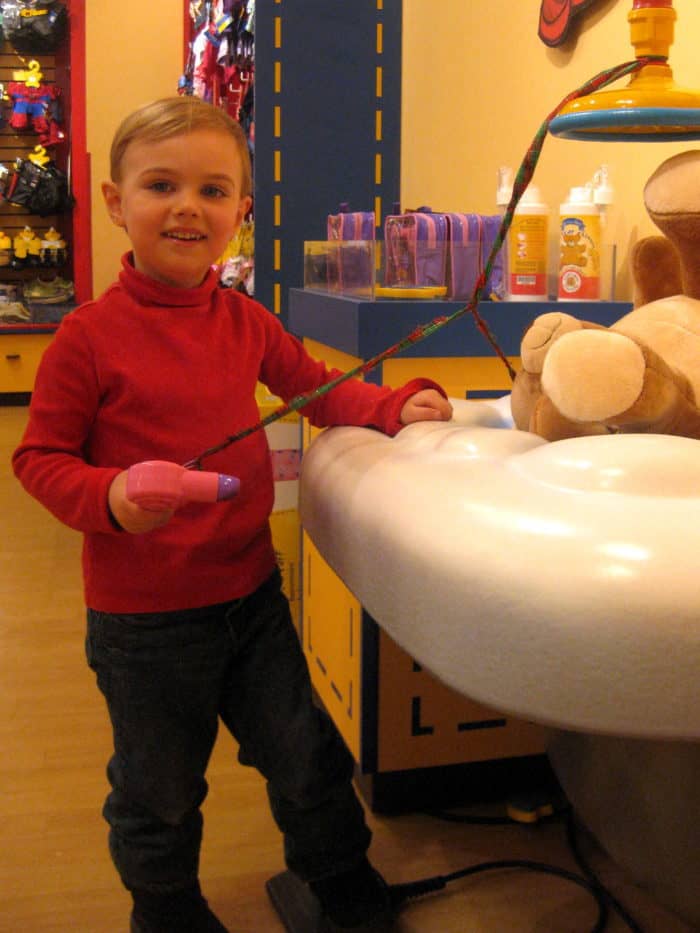 We ran around aimlessly some more, I bought some items at the dollar store (wrapping paper, candles), Don couldn’t find what he wanted at the book store (here is the rewards card, Sweets), and then . . . drumroll . . . Landon got the see SANTA!

I had forgotten that he would probably be at the mall, so we weren’t prepared to give him Landon’s list (“I want more play-doh”) and the line to get pictures with him was way too long, but . . .

LANDON GOT TO SEE SANTA!

This is the first year he has been really into the idea of Santa. He was a very nice-looking Santa, I must say, not creepy at all. 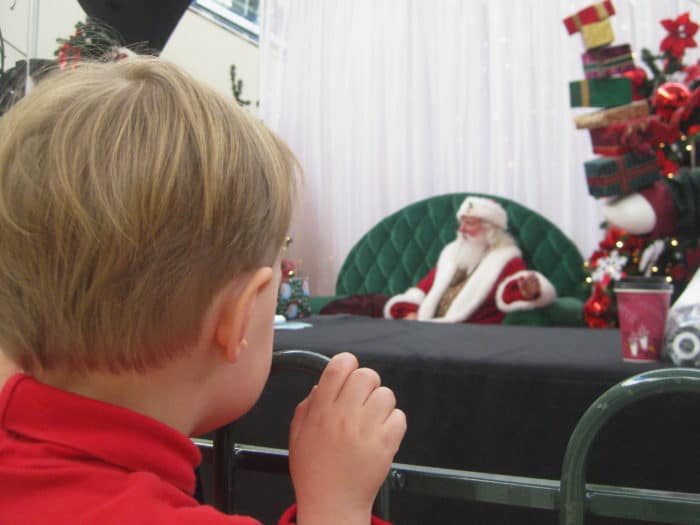 After we bought some gloves for one of Don’s sister, Landon had a complete meltdown and I had to literally pry him off the dirty mall floor and carry him, kicking and screaming and flailing and 34-pounds-feeling-like-60-pounds-if-you-don’t-stop-and-let-me-pick-you-up-I’ll-accidentally-pull-your-arm-out-of-you-socket floppy, through Sears to the car, Don in tow with two bags AND my purse.

We spent five minutes trying to talk him into sitting down in his car seat while he was a kicking, snotty mess. In the end, two adults had to use their arm strength to get one three-year-old buckled in. Sing it with me: “Oh, what fun it is . . .”

By the time we got to Don’s sister’s house (not the glove-receiving one), Landon had calmed down and played some cello with his cousin Gregory, who was practicing for tomorrow’s big Bleasdale Clan Christmas show. Everyone either does a skit or a song or something else (Grandma tap dances).

I’m going to do some lame number involving my mother tongue German, compared to beautiful songs (Don, accompanied by brother-in-law Steve on the guitar), kids playing the violin and cello, and some sketches and dance numbers. I hope Landon will sing his rendition of “Jingle Bells” (well “Kingle Bells”). 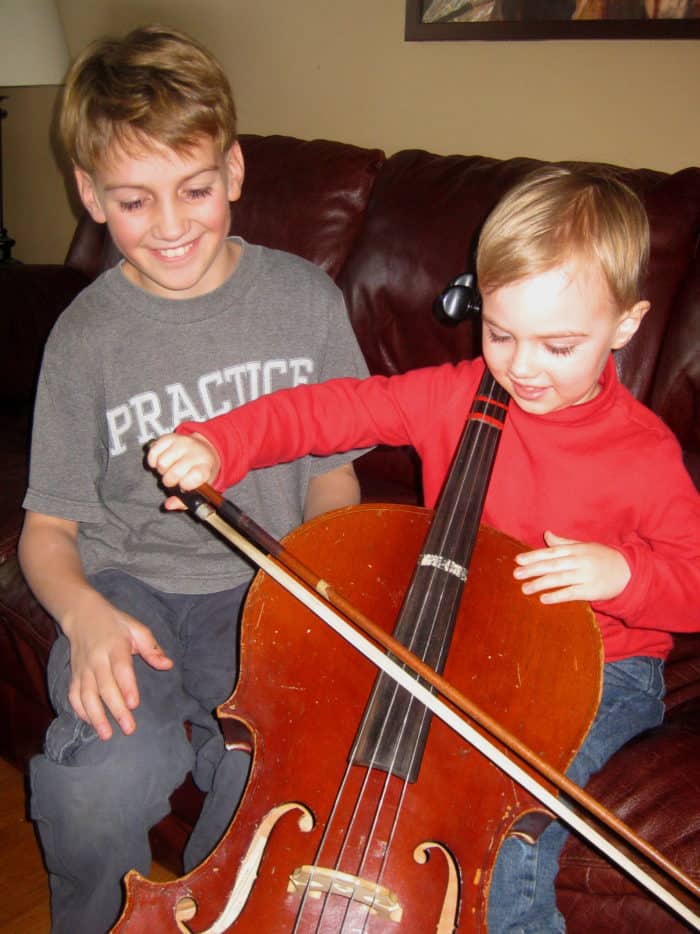 Before Landon went to bed, way too later once again (he gets a second wind, like his mommy), we put together Santa’s snack — a few cookies, eight carrots for the reindeers (how many are there again?), and milk.

I hope Santa doesn’t mind the plastic cup — Landon wanted to share his new cup he got at the school Christmas party. That is Landon’s list next to the plate (translation: “May I have more play-doh, oh mighty one?”). 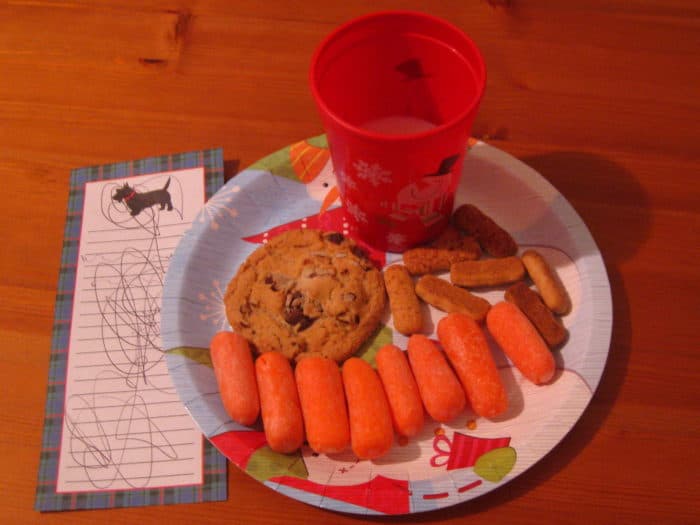 Ho ho ho! Hope Santa will be generous to you all if you are celebrating Christmas — and if he couldn’t be as generous as before, remember that this day is not about receiving gifts but being together with family and friends.

Happy Holidays!
200 Pictures and Not One With the Christmas Tree