I breastfed my son until he was five and have had a wonderful experience with attachment parenting. I never once felt like a martyr.

Wanting to be close to my baby and reacting to his needs immediately came naturally.

I was following my maternal instinct, and that felt right, and my baby was responding to this gentle kind of parenting by being a very easy-going child I could take anywhere with me. 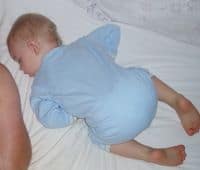 Letting our son sleep in our bed wasn’t martyrdom, it was what I wanted as a mom of a newborn — I wanted him close to me and be able to breastfeed him on demand at night.

And he wanted to be close to me, which resulted in better sleep for both of us. Bed sharing is what worked for our family.

I never set out to be an attachment parenting mom — breastfeeding my son on demand, bed sharing, and wearing him in a Maya wrap at times was my preferred choice, and I only found out years later that my parenting style had a name.

Wanting to take care of my son in a gentle, loving way that takes his needs into consideration first turned out to be “attachment parenting.” Who knew?

The TIME cover of Jamie Lynne Grumet breastfeeding her almost 4-year-old son did nothing to teach people about the many benefits of extended breastfeeding and made attachment parenting sound like an extreme form of parenting, which it isn’t.

Attachment parenting is about listening to your instincts and actually makes parenting much easier, in my experience. Taking care of a baby is hard enough, if attachment parenting wouldn’t be the easier, more organic choice, millions of people around the world wouldn’t end up practicing it.

There’s nothing natural about the Tiger Mom’s way of parenting or the crying-it-out method — it’s natural for a mom to want to pick up her child if he or she cries.

If your motherly instinct tells you to pick up and soothe your child, pick it up and ignore what other people are telling you to do, I say!

I stopped trying to ferberize my son after two days and we all went back to sleeping soundly next to each other.

The TIME article makes it sound like there’s something wrong with you if you let your child breastfeed past the first year — which is something that’s now recommended and done all over the world, just not in the U.S — share a family bed or co-sleep (have the child in your bedroom in a crib), or wear your child in a sling or wrap.

Why make it sound like you are not an attachment parenting mom if you don’t wear your child all day?

I already blogged about my take on the TIME cover.

After that disappointment, reading Q&A with Breast-Feeding Mom Jamie Lynne Grumet was a breath of fresh air — that’s the kind of information I would’ve liked to and expected to see following that cover.

Jamie Lynne is a young mom of an adopted son and a biological son, she herself was nursed by her mom until she was six, and she remembers it fondly.

Here is my favorite quote from that article:

What’s that memory like?
Jamie Lynne: It’s really warm. It’s like embracing your mother, like a hug. You feel comforted, nurtured and really, really loved. I had so much self-confidence as a child, and I know it’s from that. I never felt like she would ever leave me. I felt that security.”

Just three days ago I had a conversation with a mom who shared with me that she nursed her son until her was 5, but she says her son doesn’t remember it.

I really hope that my son will remember this very special bond and time we had together, and that he will describe his experience like Jamie Lynne did.

Being able to nurse my child, the fact that my body produced milk for him for that many years that made him grow and thrive and stay healthy is amazing to me, and because so many moms have trouble with breastfeeding, I don’t take it for granted. It’s a priceless gift I was able to give him.

It’s not about my needs, I didn’t always feel like nursing him when he needed or wanted it, but that’s part of the beauty of being a mom — it’s not about you, it’s about freely giving all you can for your child.

It’s something I wanted to do for him, and it gave me such joy in return to be able to it.

Here is the second quote by Jamie Lynne I really liked:

Question: What do you say to people who say breast-feeding a 3-year-old is disturbing or wrong?

Jamie Lynne: As far as someone who says they’re uncomfortable with this, I don’t think it’s wrong to admit this. But people have to realize this is biologically normal. It’s not socially normal. The more people see it, the more it’ll become normal in our culture. That’s what I’m hoping. I want people to see it.”

Gosh, I feel the same. I hardly ever see moms nursing their babies in public, and I think that’s a shame.

I wanted to be that mom people see breastfeed her child in public so they get more used to that picture and don’t dare bother other moms who might feel more intimidated.

And I wanted moms to see me NIP (nursed in public) so more moms feel encouraged to do the same.

That’s why I NIP as long as my son wanted. I was always discrete about it, you don’t have to make a spectacle of yourself and I didn’t want to upset anyone, but I nursed in public with the attitude that I have every right to. That’s why I proudly wore this T-shirt sometimes. I think because of my attitude about it I never once had anyone say anything to me. And if I caught a disapproving look, I just smiled at that person.

I’ll never forget how breastfeeding saved the day when I was able to nursing my feverish son through being sick while we were stuck in an airport for 16 hours.

And I have a wonderful memory of nursing my son to sleep on a ferry ride from Nantucket when he was 3 1/2 years old.

The last time I nursed my son in public was to nurse him to sleep on a plane to Germany and then back last year, when he was 4 1/2.

I’m still hopeful that the TIME cover will have some positive effects and that people find resources about extended breastfeeding and attachment parenting — like Mayim Bialik’s informative, inspiring new book Beyond the Sling — that are not just about creating controversy.

If attachment parenting isn’t for you, then don’t practice it, but it works for many parents all over the world.

Parenting is not a competition — every family has to find what works for them. And attachment parenting works for me.